How Hatsforhounds Came to Be. 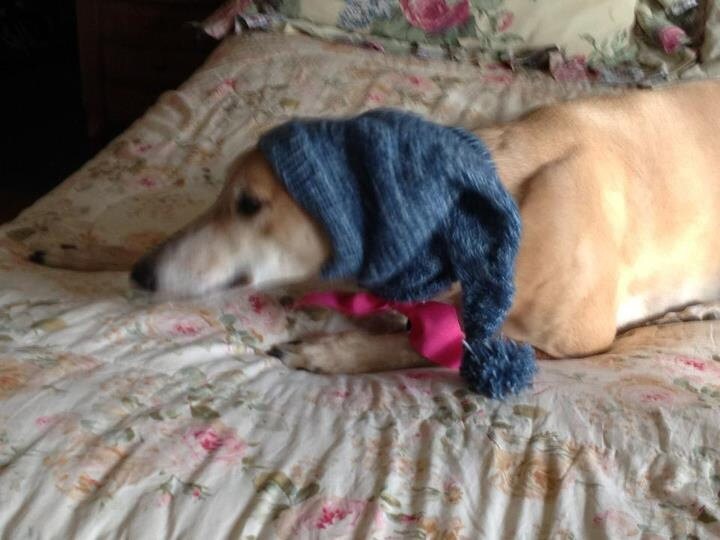 A number of years ago I found this pattern for a cute knitted dog hat. I hadn't done any knitting in years but thought I'd give it a try!  This was the first hat I made...I tried it on Heather Glen because she was snoozing on the bed when I finished it and snapped this photo.

As I was gathering material for this new feature on ETSY I came across this photo.

It was particularily poignant because just two days ago Heather took a tumble while happily eating her dinner.  She was diagnosed with Osteosarcoma in June but was doing really well on pain meds and enjoying life.  Apparently the bone in her right front leg had simple disintegrated and just gave way.  Sadly we had to bid her farewell that evening after confirming what had happened on x-ray.

Heather was a sweet loving girl as all greyhounds are.  She was a jumper, but once she arrived at home she never tried to jump another fence.  However, the day we picked her up her "sister" Elkie was at the vet getting a teeth cleaning.  We took Heather in to the office with us to pick Elkie up and she immediately bounded over the reception desk like she owned the place!

I made this one hat and then life took over and it was a number of years before I thought about making another.  In the winter of 2014 I had developed two large kidney stones and a raging infection in my left kidney.  Because of the painful nature of both the stones and the treatment I ended up being largely bedridden for well over a month.  One of the things I was able to do was knit or crochet.  I pulled out the knitting needles and yarn and started making hats for greyhounds again.  My thought was that a few of them might sell at the annual fund-raising picnic my adoption group ReGAP OF ILLINOIS hosts every September.  I made about 8 hats during that time and showed them to my daughters.  One of my girls suggested that I open up an ETSY shop and try to sell them there.

At first things were rather slow, as these things are, and I really thought that they would probably not sell at all.  I opened the shop in February and received one order in April...then nothing for months.  I continued to knit at a leisurely pace without any confidence that things would improve.  In September I bundled up all of my hats and sent them off to the picnic.  They were able to sell four of them.  In October orders started coming in from the ETSY shop and I was desperately trying to get the unsold hats back from the picnic.  By December I was knitting day and night and orders continued into January of the following year.

I'm now very pleased to report that hatsforhounds now sells over 200 hats a year, has gone international, and is now selling hats every month of the year!  Of course, the winter months are still the busiest with a huge busstle right before Christmas.

I've added another volunteer knitter which has helped me enormously.  I make hats in 3 basic sizes:  Large for Greyhounds and other large dogs, Medium for Whippets and similar sized pups, and Small which are perfect for Italian Greyhounds, Chihuahuas and other miniature breeds.

Every penny of every hat goes directly to ReGap to help defray the costs of caring for the many hounds that pass through our group every year.  Adoption fees cover only a percentage of the costs of caring for the dogs and I am happy to say that I am able to contribute over $5000 a year to help this wonderful organization.  To learn more about them you can go to their website www.regapgreyhounds.com.

I will be adding to this part of the website regularly so please come back once in a while to see what's new.  Next up will be photos of some of the dogs we have outfitted with stunning new hats.

0 items in your cart